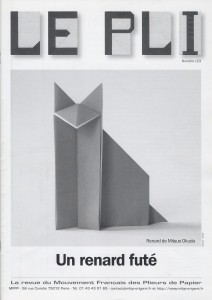 Editorial: The Golden Age of origami

We can only acknowledge that origami is an art still widely misunderstood by the general audience. Indeed, its rise has been increased tenfold with the rapidity of circulation of information and the global emulation provided by the Internet. Indeed it reaches opposed extremes, from the highly complex (thanks to the development of special papers, sometimes prepared for a unique piece, but also to the contribution of computer technology to "computational origami" or still to mathematical and geometrical research as in "technical folding") to minimalism (non-folded curves, inflexion of moist paper, wet folding). Nevertheless, it still does not reach the cultural columns that announce Art exhibitions in national newspapers.

The reasons for this vacancy, this invisibility, are similar to those for the judicial loophole in the field of the protection of intellectual property for origami creators. The MFPP does not have the ambition to discover such deep causes, but it has attempted to bring its contribution to the studies on this subject that come up in turn in origami societies across the world. What are the distinctive features of this art : origami? How is it that the deference of the origami author's rights doesn't appear so imperious as in other artistic fields? Why is the distinction between amateurs and professionals so vague? Should we regret this situation, or on the contrary are these not reasons to rejoice? Perhaps today’s origami is still at its Golden age, one of innocence, an original paradise...

Modesty of the creators

Still quite a number of models are labelled "traditional", when what is really to be understood is "we have forgotten the name of the author". This is what comes out of an investigation led by Michel Grand, living memory of our origami world, at the term of which the name of its father is returned to a famous Fox : Mitsuo Okuda.

Sharing rather than rivalry

One day, Guillaume Denis, French folder, designed a Manta Ray model. He then discovered on the Internet that Vietnamese folder Hoàng Tiến Quyết had created a similar model based on a different technique.  Guillaume wrote Quyết to propose a publication comparing both diagrams. Quyết gave an enthusiastic answer. No competition, only the joy of exchanging ideas.

Education rather than sanction

Sarah Adams devotes long pages in the origami USA online magazine "The Fold" to teach with maternal care the children of Origami the elementary rules of savoir-vivre : asking permission from the authors before  using their models...

Exploration of the possible and non-abidance to the rules

On the fringe of paper folding, Florence Girard's dancer is based on the technique of (wet) crumpling, using scissors, rubber bands and clothes pegs to shape at all costs a moving silhouette, freed from any  geometrical constraint.

The MFPP is an organisation that brings together all paper folding enthusiasts and that wishes to promote the expression, communication and creation through the practice of this art. Its role in cultural diffusion puts it at the same level as origami professionals. However, as a non-profit organisation, the MFPP defends such values as : solidarity, responsibility, no individual profit, primacy of the human being  over money, man   serving man. These values, even though they are indispensable conditions to the friendly and warm atmosphere that is still characteristic of the origami world, are not incompatible with rigour, quality and reliability which are the better sides of professionalism. Finally, to bid farewell to its creator, David Petty, we have included in this issue the diagram of the famous "Beating Heart".

Let us always keep this symbol in our memory to prevent the origami world from becoming a lost paradise.