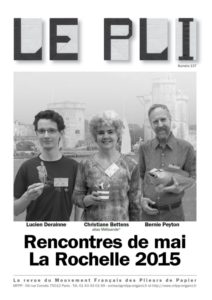 Elected as president of the MFPP at the latest Rencontres de Mai in La Rochelle, I would like first of all to thank the board of administrators for the trust they grant me and the team for the work accomplished.

These Rencontres de Mai have once again been a great success, and I pay tribute here to the organizers who did not spare their time or energy to measure up.

I particularly acknowledge the quality of the performance offered by our guests, Bernie Peyton, Christiane Bettens, and Lucien Derainne, who made us dream, and shared with us their universe.

For the next Rencontres nothing is fixed yet. We are currently exploring various possibilities, and will be able to tell more after the summer holidays. In this respect, I strongly invite those who would like, one day, to organise meetings, to start moving well in advance, a 2-year delay for this kind of event doesn't seem luxury.

However, all is not so bright. Today the MFPP is going through a rough time, and it needs each one of us to get the new impetus it needs.

Indeed, the Web radically transformed our environment and our ways of living, thinking and acting. We find everything on the Internet, the best and the worst, and as regards our common interest, even if it represents a true factor of promotion, copyrights are shamelessly disregarded or ignored, books pirated without remorse, not forgetting diagrams, photos and video that proliferate on the net.

Of course the Internet allows us to see that we are not alone, and to connect with folders around the globe. Discovering new styles, new technologies, has become easy but there is a downside, and the advantages of joining an association have considerably decreased over the last years.

The services provided by an association are either outdated, ill-adapted to our new environment, or not widely known. For example, the book lending service of our Orithèque faces rough competition from on-line shops. Shipping costs are, in some cases, higher than the cost of the book bought directly. Yet it does contain priceless treasures.

I am convinced there are solutions and we can bounce back. For that purpose, the MFPP must be a driving force, show that it exists and that it cannot be overlooked. We must set out on a mission, fight against the loss of members, promote the group and improve its visibility.

Admittedly, we have the Rencontres de Mai, which are a splendid gathering, and Le Pli, of a reputable quality, yet there is still a lot to be made in particular in communication and promoting our actions.

In the coming weeks, I will propose a certain number of actions aimed at spreading information about our association :

A few projects are emerging for this purpose :

Nothing, however, can be achieved without you. Therefore, I invite you to share with us your expectations, wishes, ideas, proposals… I will make it a point of honour to answer each of you and to implement the most pertinent proposals.

Meantime, until the Rencontres 2016, let's meet in the following Le Pli and on mfpp-origami.fr.