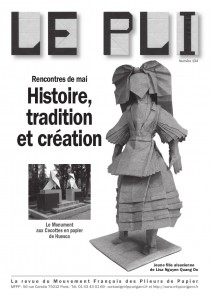 Editorial: Origami and its symbols

First of all, I would like to thank the team of volunteer editors who once again produced good work. This issue comes with a little delay, however I am sure its contents will not disappoint you !

Origami Alsace, the local organisation that hosted this year's international gathering, is a group of paper folders that came together 20 years ago following the Rencontres de Mai 1994. We all rejoice at this long-term vitality of Origami in France, even if we find that our art still lacks acknowledgement among the general public. In this respect, the open-day at the Maison d'Accueil Notre Dame des Trois Epis contributed its share to the cultural spreading of paper folding. Hundreds of visitors enjoyed the varied exhibits of splendid models from all countries.

We shall find more echoes of these rich exchanges, renewed every year, in several of the coming issues of our magazine. Our 4 guests, Carmen Sprung, Joan Sallas, Juan Gimeno and Michel Grand, creators of models and historians of the paper folding, have a lot more to share with us.

The Monument to the Pajarita

Juan Gimeno presents a gripping text about the monument to the Pajarita that is visible in a Huesca park near Zaragoza, Spain. This unusual piece is a creation of Spanish artist Ramón Acín (1888-1936), and we will learn what Origami represented for him.

The MFPP's 2nd international contest brought happy surprises, including the revelation of this previously unknown young folder : Lisa Nguyen Quang Do. She drew herself expressly for Le Pli a richly commented Crease Pattern of her delightful model of a young Alsatian girl in costume, first prize winner of the contest.

Elsje Van der Ploeg & ELFA : the story of a friendship

it is with great sadness that we learned of the passing of Elsje. Michel Grand pays tribute to his long-time friend.

After over a year of exchanges and preparation, the first European book of origami is finally published. We hope that many other fruitful projects will follow.

The life of the association

For the third year running, a team of volunteers worked together for a summer week of stock-taking and renovation work at our head-quarters rue Coriolis, Paris.

The members of the Committee have started considering the future of our association's headquarters : the space needed for our steadily growing Oritheque has reached its limits, and the premises are hardly inviting (in spite of all the efforts of the volunteers) due to its slowly succumbing to ravages of time. Let us keep in mind that we have been renting the place since the 80's. How Time does fly! Decisions will be made during the coming year.

New development on the web site

To new pages have been created : Diagrams for download and a calendar of events. The Members' area now allows you access to Le Pli's digital supplements, documents regarding the association and the members list (please do not distribute outside the MFPP's circle). To join now the MFPP Online : http://mfpp-origami.fr, rubrique Espace membre/S'enregistrer 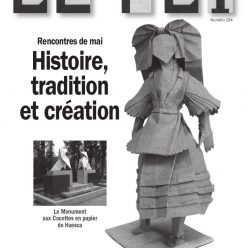