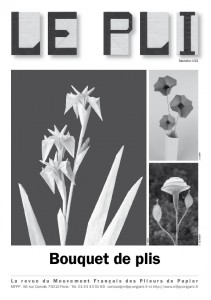 Why take part in a European project?

Preparing the European Origami Book project, initiated by Mark Bolitho, B.O.S. Chairman, the MFPP and a dozen other associations or sympathisers representing European countries organized themselves to set up a protocol for the selection of 5 diagrams each. From the start, various specific issues arose: Who will make the final decision? Who will arbitrate at each step? What will be the choice criteria?
The MFPP's committee opted for the following protocol : a call for submissions followed by the final selection of diagrams by a specially elected committee. I wish to thank here the members of this committee, of which I was also part (all volunteers, of course!), Tudor Balan, Yves Clavel, Guillaume Denis, Aurèle Duda and François Dulac. I can testify to their commitment, their upright honesty and the care with which they examined all the documents. We had to choose among a total of 12 submissions. None of them was perfect (the 5 selected diagrams have all been redrawn, except Eric Joisel's) but all showed interesting features. Very fortunately, the committee members were quite unanimous on the 5 choices, although quite a few regrets still remain ! Let us take note that the French diagrams already feature characteristics of international teamwork, as some creators have worked hand in hand with foreign diagrammers : Paula Versnick and Michel Grand, Pere Olivella and Sébastien Limet, and Christophe Boudias is currently a French expat in Columbia.
The winning selection criterion was, much more than the aesthetic quality of the photograph of the finished model, the quality of the initial devising of the instructions; when diagrams and symbols become a true worldwide language that does not require translation. It is a strong symbol of sharing and the distinctive generosity of paperfolders. In this respect, Lydia Diard's use of a photo-diagram to present a tessellation, a difficult technique to diagram if any, is remarkable in its precision, efficiency and clearness.

At the conclusion of these days of harsh considerations and discussions, we are happy to find in Le Pli a collection of models that sets on equal footing authentic creations and mere exercises in style, serendipitous findings while playing around with paper. With all these flowers and a clever garden label, we are ready for spring to come.
As said above, Sébastien Limet and Christophe Boudias, who contributed to this issue, will represent France in the European book, whereas Guillaume Denis and Aurèle Duda, also in these pages, have renounced to present a model as they were part of the selection committee… Let them receive our friendly salutations for their honourable humility.

Thanks to Aurèle Duda and Louis Eveillard's work, a new version of our website will soon be available with new features and a more user-friendly interface.
I keenly emphasize that they spared no effort to slip into the line of work launched by the previous team; thus illustrating the ultimate team spirit !
And finally, registration to the Rencontres de Mai 2014 will soon be open on the new version of the MFPP's webpage.