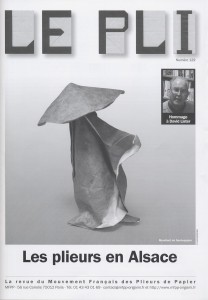 Editorial: Let us go and meet the French folders

Most folders in France are non-professional hobbyists. They are the ones who act locally to spread awareness of Origami. We depend on them for an in-depth cultural evolution that will prepare the general public to appreciate contemporary creators. In this issue, you will find a report on the actions in Alsace, also covering the regular contacts with German folders, signed by Josiane Ferraretto.

After Sébastien Limet, we are glad to greet in theses pages one of the most prolific and resourceful French creators. His models are already well known through an on-line photo gallery. We named : Barthélemy Dunkan, aka « Magic Fingaz ». His "Oiseau Barth" (formerly "Little bird") is of a very classical fashion and presents only one facet of the artist's very manifold craftsmanship. Thanks to the generosity and talent of Carlos Gonzáles Santamaría (aka Halle), we are presenting once more a superb diagram : the "Beggar" (Mendiant) by Gachepapier, French speaking folder, a regular contributor on the "PliagedePapier.com" forum. This model entails an important part of modelling and consequently a certain "Artist touch". Finally, we are pleased to publish two of Christophe Boudias' diagrams, a French folder and faithful friend of the MFPP's from far away Colombia.

From now on, the MFPP is happy to count in its ranks a new talented diagram-designer : Jean-Jacques Delalandre. We are thankful to him for his efficient production and the quality of his cooperation !

We have inserted in this number, some pedagogical hints for the daunting "sink fold". We owe them to J.C. Nolan, an American folder, with a translation by Jean-Christophe Helary.

Who does What at the MFPP ?

And finally, those French folders who make possible the meetings between amateurs, professionals and French and International folders are above all active members of the MFPP ! We are initiating here a portrait gallery of these volunteer workers. First part : the members of the Board. We shall enrich this gallery later on with the introduction of the members of the Council, and ultimately the various regular or occasional contributors to the life of our association. The list is bound to extend as time goes, since the answers to our survey "Qui peut faire quoi au MFPP ?" brought forward some new volunteers.

As a final tribute to David Lister who passed away last February, you'll find in this issue the diagram of his "Four Thirsty birds" drawn up Nick Robinson, as well as a last letter by Joan Sallas.