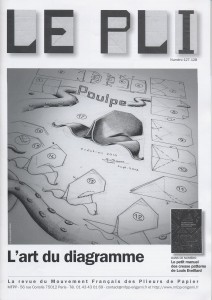 Editoriral: The Art of Diagramming

All those who love origami for the time spent folding and linking together a series of folds, have the heart filled with gratitude towards diagram designers. Indeed, the architectural beauty of the origami model is not detected from the final step, the only one to be exposed or photographed. This specific beauty reveals itself in the process as a whole, in the elegance of movements and junction of folds that lead to the paper statuette, the visible part of the iceberg. None other than the diagram designer can reveal to us this secret beauty, throughout the hours during which we fold with happiness, guided by him.

Guillaume Denis, faithful designer for Le Pli, bears witness to the questions, thoughts and dilemmas that appear to every diagram designer, whatever the applied technique. All the meaning and value of this process are summed up in the preface of the last publication of one of the greatest diagram-designers alive, Hideo Komatsu : "In drawing diagrams, the understanding of the model will be deepened and the model itself will be made neater." (see references and critic of the book in Le Pli n°126).

Hoang Tien Qyuet, member of the Vietnam Origami Group, developed a method for photo-diagramming in order to obtain a greater conformity with reality, in particular in the case of 3D steps. He is of the opinion that a photo-diagram tells us the "story" of the model, as it were.

Nicolas Terry, a French publisher of diagrammed-origami books, tells us of his work, and highlights Carlos González Santamaría's (a.k.a. Halle) excellent diagrams. The two-page diagram of the Devilfish from Spanish folder Andrés Lozano, that Carlos bestows us, completes the series started in Le Pli n°123, in which Guillaume Denis and Hoang Tien Quyet compared both their techniques on the same subject.

We will discuss the ultra concise system of marking the useful creases of the unfolded sheet of paper that come forth after the last step of folding, with Louis Eveillard, as a representative of the younger generation of folders fascinated by complexity. This seems a puzzle for many readers. With the superb booklet enclosed in this issue (which was originally designed in the context of higher education studies in graphic design), we will start thinking about this new tool. This also leads us to some forethought about the future. Will the abounding development of freely accessible videos on the Internet (unfortunately not always with permission of the author or credit, let us remind it, which is of an inelegance so rarely found in diagrams), that make widely popular models that do not exceed a certain level of complexity, and in parallel the crease pattern, antiquate the diagram? Let us hope alternatively that all these means of transmitting Origami will be able to coexist in a harmonious and complementary way.

I wish you all an excellent year 2013 ! And let us meet at the Rencontres de Mai, in Dijon, with our guest Aurele Duda, Hoang Tien Quyet and Tomoko Fuse. Details on our website www.mfpp-origami.fr